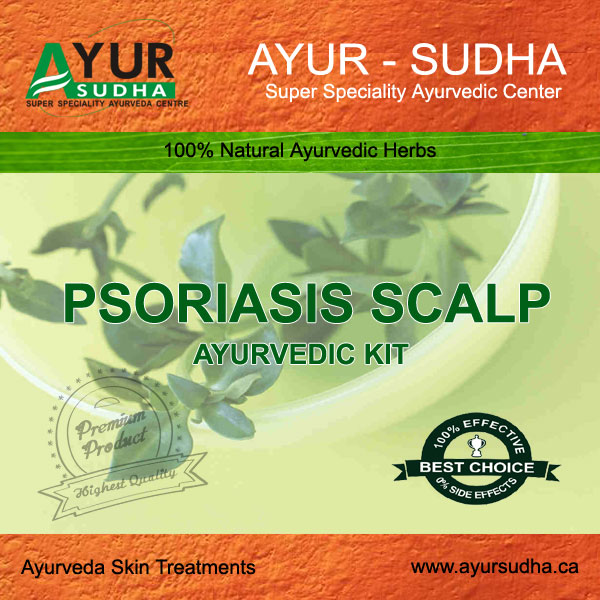 Scalp Psoriasis is a skin condition in which red scaly thickened plaques of psoriasis are formed. Scalp psoriasis may be formed alone or may be associated with psoriasis of the body.
The back of the head is the most common site to happen. Multiple discrete areas of the scalp or the whole scalp may be affected. Scalp psoriasis is characterized by thick silvery scales over well-defined red thickened skin. It may extend slightly beyond the hairline.
The severe flaking of the scalp and sever dandruff may cause hair loss but it doesn’t give permanent hair loss.

The pathology starts due to the formation of “ama” the toxin produced by the faulty digestion. These are endo toxins which causes many disease to the body including skin diseases.  Poor digestion forms immature “rasa”  or chyle . This is the main culprit to develop any disease. In Psoriasis the dosha becomes disturbed due to the faulty rasa dhatu. All the three doshas gets vitiated  and produce their symptoms. Deranged vata produces itching , scakly skin and dryness . Deranged pitta produces inflammation and heat. Deranged Kapha produced rough skin.

These dosha goes to the scalp and damages the skin of the scalp and causes Psoriasis of Scalp.
The imbalances of the dosha causes the “ Rasa vaha Strotas Dushti” , “ Medh vaha strotas Dushti”  and “Masma vaha Strotas dushti” and the channels (Srotas ) gets blocked . The proper nutrition doesn’t reach to skin – Twak- . Due to nutrition deficiency the   skin becomes weak and diseased.