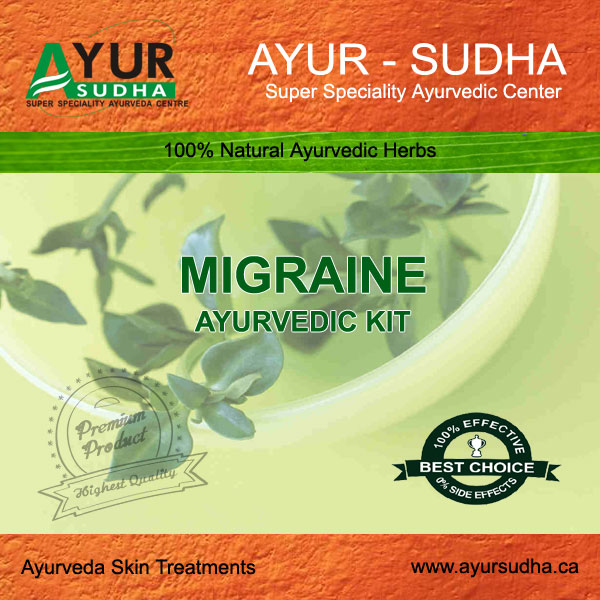 ANTI- MIGRAINE KIT
Ayurvedic yogas and medicines Made by our AYUR SUDHA Centre are very effective in most of the patients and they get permanent relief from Migraine pain without any side effect.

AYUR SUDHA has treated More than 2000 patients of Migraine successfully and most of the them never came back with this problem again , however around 1% patients came back with mild to moderate problems who earlier have severe symptoms of migraine and they also get relieved by few days of medications.

The herbs and Ayurvedic Herbo-Mineral medications are used for treatment are completely safe and the course of medicines is around three to Six months according to the symptoms of the patients.

Most of the patients gets relief with oral medication but In some cases Panchakarma Destress and Rejuvinating therapies are prescribed to the patients to balance the Doshas who effects the Manovaha Strotas.

AYURVEDIC VIEW
The principles of Ayurveda said that Migraine is a tridoshic disorder, Out of the three doshas , Vata and Pitta are more causative factors for this disorder. The Vata controls the nervous system imbalance of the vata causes the disturbance of the equilibrium of the nervous system of the brain that causes pain. The improper diet  , metabolism , faulty life style , poor elimination , mental and physical stress, irregular routein , excessive awaking during night aggravates the vata dosha.
The improper diet and lifestyle causes a Vitiated Pitta dosha causes dilation of the blood vessels resulting in severe and throbbing pain.  Pitta dosha impairs digestion and the AMA produced by this gets stored in the Manovah Strotas (Mind Channels) and causes the migraine pain.Migraine is described in Ayurvedic Texts as ARDHAVABHEDAK means half sided headache. Some texts resembles it with “Anantavaata” –meaning literally the unilateral pain that resembles the classical migraine. It is a terrible headache often accompanied by the  feeling of nausea and vomiting. The pain is usually felt on the one side of the head.

MIGRAINE DUE TO DOSHAS

Symptoms
Every Individual have different clinical features of migraine pain , by history and aided things physician have to r/o migraine with other pains.

Nausea and vomiting
Throbbing or pounding pain on one side of your head (or both)
Light, noise, and movement—especially bending over—make your head hurt worse; you want to lie down in a dark, quiet room

No one knows for certain what causes migraine. Things that can trigger migraine include the following.

Certain foods and alcohol; missing meals; too much sun; sleeping too little or too much
Hormones and menstruation
Certain odors, such as perfume or cigarette smoke
Stress
Blood platelet disorder
Low Blood Sugar or Hypoglycemia